Lorde has plans to release a new Single Tomorrow! 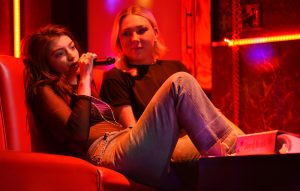 Fresh from the Billboards, artist Lorde is set to release a new single tomorrow, Friday June 2, following some tweets teasing her long awaited second album. The new work will be entitled ‘Melodrama‘. She has already shared two songs from it ‘Green Light‘ and ‘Liability‘.  She has also performed new track, ‘Homemade Dynamite‘ live. Recently sharing the next song to be unveiled from ‘Melodrama’ is the best thing she’s ever written and ‘sounds like nothing else she’s ever done’. Earlier this week, the Kiwi pop star tweeted an image of what appears to be song lyrics. “Every night I live and die – feel the party in my bones,” it reads. A second image reads: “Friday, June 2nd. 2pm NYC 6am NZ”.

Born Ella Yelich-O’Connor (Lorde) from Auckland, New Zealand, was always drawn to performing since she was a child. In her early teens, she signed with Universal Music Group and was later paired with songwriter and record producer Joel Little, who produced most of her works. Lordes first major release, The Love Club EP, was released commercially in March 2013 which reached number two on the national record charts. Since then she has been awarded two Billboard Music Awards, one MTV Video Music Award, three World Music Awards and two Grammys in 2014 for her hit “Royals” which at her age is something to be tremendously proud of.

Lorde wants her new music to be really special!

Lorde said her new music “had to be really special” and that it couldn’t “sound the same as the old stuff”. She added that the song is about “my first major heartbreak,” adding: “It’s not something that I really am used to writing about… It took me a while to be able to figure out how to write about that.” We all can’t wait to hear what she has in store.

Connect With The Following

If You Listen You Will Understand Future Clearly!

Can’t Take Kendrick out of His Element!

KYLE has Nothing 2 Lose